Performance Formats: seven-piece band, as well as other combinations 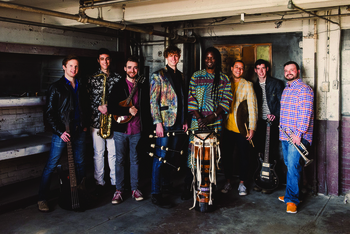 “Sure to turn anyone into a dancer. …vibrant and never repetitive. …Soulsha is truly unlike any other jazz or Celtic band out there.”
— Kathryn Leeber, The Noise Boston


Soulsha is a party, a revolution, and an adventure through different traditions. It brings together some of Boston’s top musicians in Scottish, West African, and Funk music to create a sound you won’t find anywhere else on the planet.

Many of the members are virtuosic and highly esteemed tradition-bearers in their styles. The music they’ve created is a conversation between cultures that breaks down all the boundaries, moving the audience to abandon their assumptions as they lose themselves on the dance floor.

While it shares obvious roots with Afro-Celt Sound System’s electronic fusion, the funk-inspired sound of Soulsha puts tradition and interchange center stage, bringing the party energy of Rebirth Brass Band, and the cultural gravitas of masters like Malian Toumani Diabaté. The sound is fun but deep, fresh but familiar, immigrant and yet deeply American.