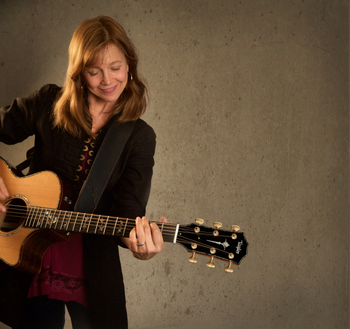 Online/streaming offerings:
Concerts (which can be themed or customized to a specific audience)


“The bluesy warmth of her voice and the support of musicians who give these confessions an edgy propulsion. Rapturously tuneful, Newcomer’s material asks all the right questions and refuses to settle for easy answers."
— Rolling Stone

“...she has a universal vision and appeal.”
— Paste

“Newcomer isn’t preachy or self focused. She is a poet of reality, facing the soaring joy as well as the hard truths of powerful love. Newcomer has a gorgeous voice, used with intelligence and grace. An outward and visible sign of an inward and spiritual grace.
— Wayne Robbins, Billboard


Carrie Newcomer is a songwriter, recording artist, performer and educator. She has been described as a "prairie mystic" by the Boston Globe and one who "asks all the right questions" by Rolling Stone Magazine. Carrie has 19 nationally released albums on Available Light & Concord/Rounder Records including Until Now, The Point of Arrival and The Beautiful Not Yet. Newcomer has released three books of poetry & essays, A Permeable Life: Poems and Essays, The Beautiful Not Yet: Poems and Essays & Lyrics, and Until Now: Poetry by Carrie Newcomer. Her song "I Should've Known Better" appeared on Nickel Creeks' Grammy-winning gold album This Side, and she earned an Emmy for her PBS special An Evening with Carrie Newcomer.
Recent appearances include PBS Religion and Ethics and Krista Tippett's On Being.

In 2009 and 2011 Newcomer was invited by the American Embassy of India to be a cultural ambassador, resulting in her interfaith benefit album Everything is Everywhere with master of the Indian Sarod, Amjad Ali Khan. In 2013 Carrie traveled to Kenya and the Middle East, performing in schools, spiritual communities and hospitals assisting AIDS patients. In 2015 Carrie's first musical, Betty's Diner: The Musical was produced by Purdue University. In 2016 Carrie was awarded an honorary degree in Music for Social Change from Goshen College. In 2019 she received The Shalem Institutes's Contemplative Voices Award.

In recent years Carrie joined with the author Parker J. Palmer on several projects, including The Growing Edge collaboration, which explores growing edges, personally, vocationally and politically. Together they create live events, personal growth retreats, and the highly rated The Growing Edge Podcast that features authors, activists, poets and musicians, and online conversation starters for book and other conversation groups. Spirituality and Health Magazine named Parker & Carrie in the top ten spiritual leaders for the next 20 years.

During the COVID-19 pandemic, Carrie was involved with many creative online projects, including the creation of her own streaming studio, Available Light Studios. She helped found a new online concert platform, Mandolin, with her husband Robert Meitus and has continued to perform and present workshops in person and online.

Carrie is known for her low and resonant voice "..as rich as Godiva Chocolate" according to The Austin Statesman, for her musical depth and the progressive spiritual content of her songs, poetry and workshops, and for her continued work in justice, spiritual and interfaith communities, and health and hunger organizations. She lives in the wooded hills of South-Central Indiana with her husband and two shaggy rescue dogs.