Mike Green & Associates - Booth 542
To schedule a meeting with us at APAP 2012, email Mike Green

With a unique, multi-instrumental sound that crosses the musical landscape to include traditional and original rock/pop songs, film sound track music, and Irish-based foot-stompers, The Rogues’ creativity and drive combine the worlds of Celtic, rock, folk, pop, and classical music. Bursting with Scottish pipes and drums, this band connects on every level with their audiences.


Nuala Kennedy’s singing and flute playing springs from the traditional music of Ireland and Scotland, and from the fathomless realms of her own imagination. A consummate performer with a buoyant personality, her music has been described as “unique,” “evocative,” and “soul-satisfying.” Her instrumental prowess is deep, and her repertoire is expansive, including both Scottish and Irish tunes. 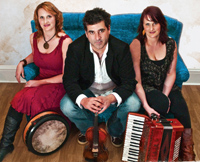 Vishtèn draws its music from the Acadian heritage of Atlantic Canada, as well as the Irish and Scots, whose fiddle tunes permeate the region. It is a lively, upbeat dance-hall fusion of sound that’s frequently punctuated by step-dancing. The sound is essentially Celtic, the songs are French, sung either solo or in three-part harmony, and the foot percussion drives the rhythm in a fiddle tune or softens in the gentler musical moments.